The Tai Chi Centre:
TCC was started in 1995 in a studio in South Kensington teaching Yang Family ‘Hidden Transmission’ Tai Chi Chuan (YMT). It expanded to regular classes in Chelsea, Kensington, and Notting Hill Gate. The classes are now centralised into one location in London, with all classes providing for everyone from the experienced to beginners. 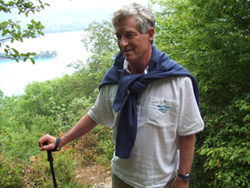 Peter Clifford (Xu Bin):
Xu Bin is the main instructor at The Tai Chi Centre. He lived in Taiwan in the 1970’s, and 1980’s, where he studied extensively under Master Wang Yen-nien, and was one of his first western students, assisting him in his early workshops in Europe. He has studied and taught tai chi chuan for almost 40 years, and teaches form, push-hands, sword, and fan. He was a founder member of the European College of Tai Chi Teachers in 1989, and set up The Tai Chi Centre in London in 1995. He is a registered instructor with The Tai Chi Union for Great Britain.

Master Wang Yen-nien (1914 – 2008):
A Fourth Generation tai chi master, who was born in Taiyuan City, Shanxi Province. From 1945-49 Master Wang received the full transmission of the Yang Family Hidden Tradition from Master Zhang Qinlin. In 1949 he moved to Taiwan. He taught tai chi for more than 50 years, and was recognised as one of the world’s true authorities on the principles and practice of tai chi chuan. He was National Yangjia Michuan Taijiquan Association (ROC-Taiwan), President and chief instructor, and World Yangjia Michuan Taijiquan Federation, President. Master Wang was also a Fifth Generation Taoist Master with the Gold Mountain Daoist School of Internal Alchemy.

Master Zhang Qinlin (1888-1967)
He was from Hebei Province, and the first non-Yang Family member to learn Yang Family Hidden Tradition (YMT) which he learned privately from Yang Jianhou.

Master Yang Jianhou (1839-1917)
He was the third son, the youngest son, of the legendary Yang ‘The Undefeated’ Luchan, one of the founding fathers of present day tai chi chuan, and the father of the renowned Yang Chengfu (1883-1936).

Master Yang Luchan (1799-1872)
Began his learning of tai chi at Henan Province Chen Family Compound, then entered the world of wandering martial artists to develop his skill, creating this Yang Style (YMT) of tai chi. He became famous and earned the name “Yang Wudi” (Yang, the one having no equal or match). He was made the military’s wushu instructor, but did not want to teach this private style to the Manchu nobility.